So in the spirit of not-enough-chores-at-work I’ve today found a sickly bad workaround for how to handle try-catch statements.

My solution is (like the code of your website) solved by a clump of workarounds to achieve a pretty simple goal. Howevery, because of my humbleness, I find my solution to be quite best and 300IQ’d.

The G1ANT.Robot lang has some sort of error handling built in, which is nice; but only for commands. What you can do is to append the arguments errorresult and errorjump to any command, and they’ll catch ‘em all. Like take a peakis at this dungus script example:

^this is an integration test of wanted compiled output. Not even hard to program into the compiler.

HOLD THE BANANAPHONE THO! This method only works for the blammin commands! What about the equations?!? You can’t add errorjump to an assignment!

Well a me and lots of coffee can answer that! You c, I found a loophole.

My trial-n-error has revealed to me that, if you assign a variable, the robot interpreter actually tries to compile it into C# first, ALWAYS! (This is probably one of the reasons it’s so shitty slow) Then if it fails, it just reads it as a string.

Which means, you can just throw in a comment in there! If the variable holds that comment in the start: it failed,,, and in the case it succeeded: no comment!

Its gEnIOUs I tELL yAA!

So let’s see an example of my beautiful solution: 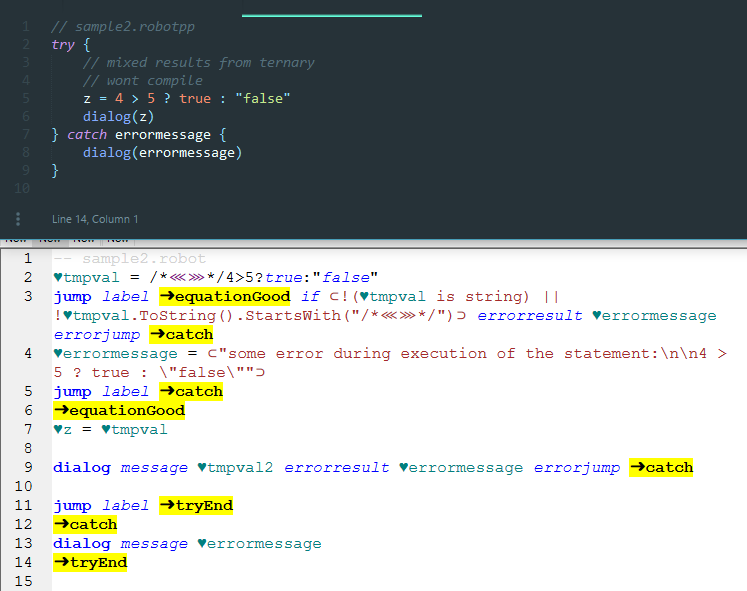 These compiled .robot scripts are going to be sooooo unreadable! LOVE ET.

Til’ next time, cheerio grunkbutts!

EDIT: HOLD THE FUCKING SPACEJAM. UHGH muttfluckers, you can Just Fucking throw all shits inside a procedure and then errorjump that! Works even smoother. 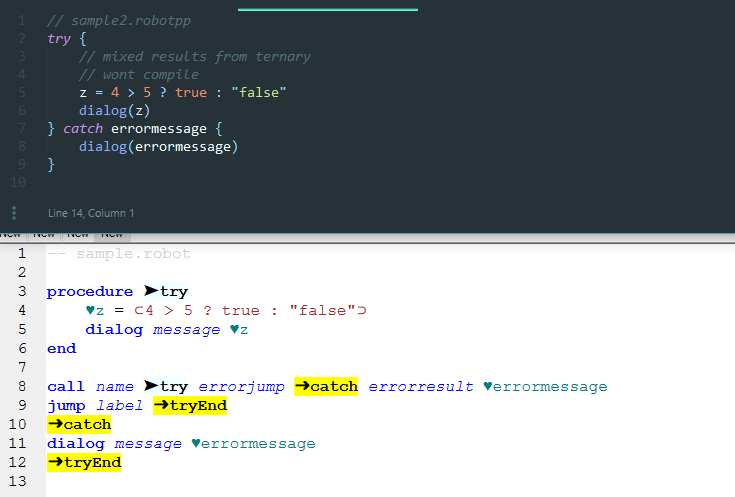 SIGH, AND HERE I’VE WASTED UNPRECIOUS WORK TIME IN THIS WHEN THERES JUST A SIMPLE SOLUTION AS THAT?!?

So worth tho. Still proud.

To compensate for my derp tho, I give you derp gif