YouTube has some annoying features. Some of which I am thankful for because they annoy me so much that I leave the platform and go do something else as I don't want to waste too much time on there anyway. But is there some kinks with its software that you as an UX designer or software developer could take use of?

First off, let me just rant a little about what I dislike, in descending order of how much I hate them.

If the video has captions, you will see captions. Even though you've disabled it in your profile settings and have disabled it on countless videos, you still get captions on a video that has them.

On the phone, the captions take up such a big part of the screen that they're usually in the way of some of the content in the video.

If you're native english speaker, you probably never experience this. But the titles of the videos in your recommended or subscription feed are sometimes translated.

I'm a native swedish speaker, and when a video with a swedish title pops up on for example a Kurzgesagt or CGP Grey video, I barely understand the title as I'm expecting only english titles in my feeds. 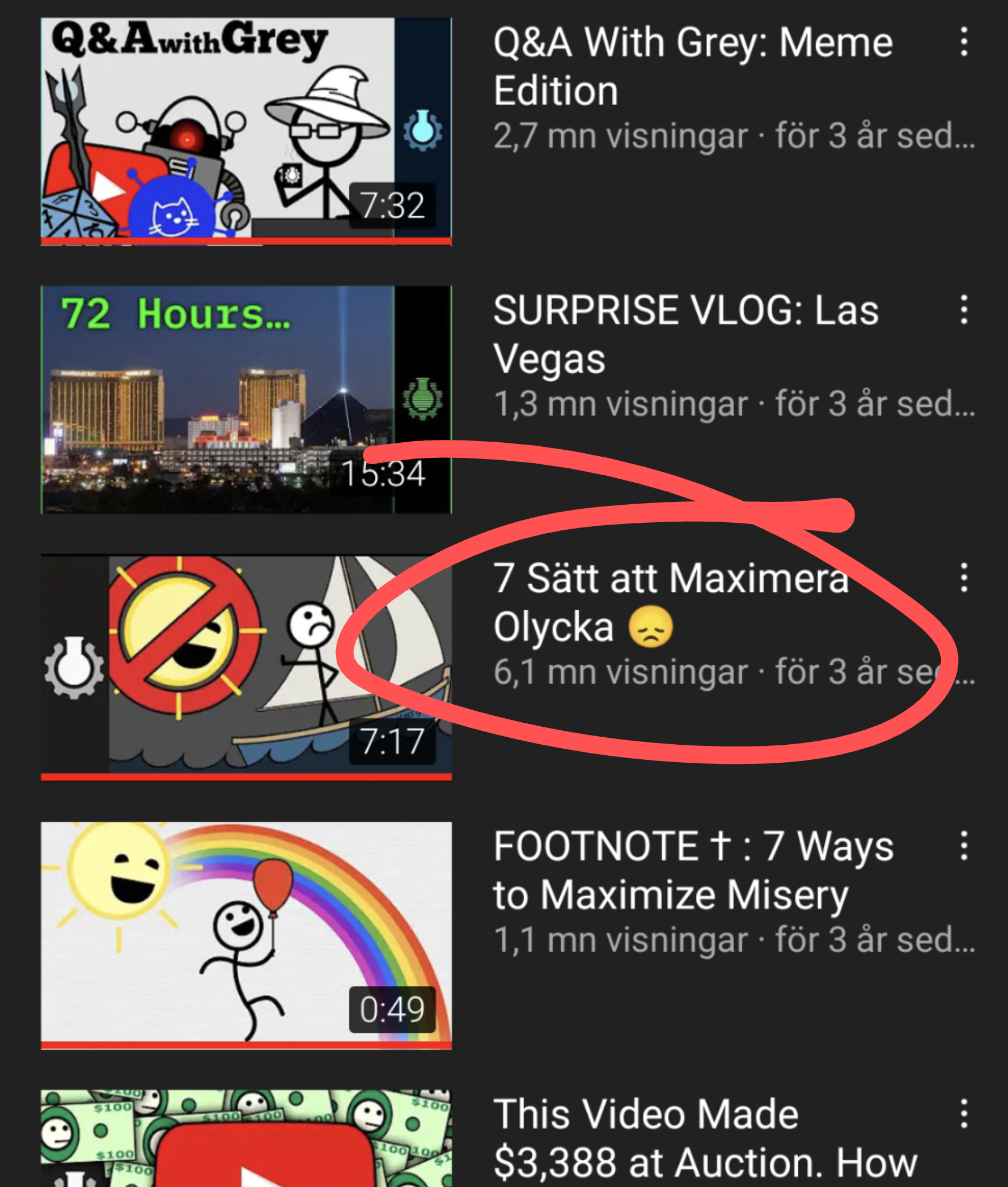 Who even wants this feature?! Parents say that their kids get lured by the translated titles thinking that the content will be in that translated content, and most adults are just annoyed that it's unnecessary as they already understand the content of the video anyway.

I had trouble coming up with the name of this issue. This one bugs me probably more than it should, but when you open a video you've seen only a part of (or if the video has a really long end credits) then when you open the video again you instantly move to the timestamp of where you watched previously.

It's a little bit annoying when I want to watch a video from the start instead of jumping into the middle, but what really bugs me is that this feature is so got damn inconsistent that I just don't watch the video altogether instead.

This is tedious and annoying. Not horrible. Altough Netflix got this one on-point by asking you “Hey you want to continue where you left off or restart?”, and maybe YouTube could take some inspiration from there.

4. When scrolling breaks (on the phone)

After using the mobile (Android) YouTube app for more than like 15min, my scrolling usually breaks. No clue if others experience this but at this point I've never gotten good response from reporting bugs to YouTube and so I just sit and complain about it here instead.

The issue is just that when I scroll the list of reommended videos, the scrolling jumps up and down and resulting in that I cannot even scroll down to the comments if there's an ad there in the way.

5. Inability to jump back to previous videos

Did they ever have breadcrumbs/history on the mobile app? I can't remember. But if I click the back button on the phone while watching a video, I expect it to jump back to the previous video. But no I get the home page of the app instead and the current video is just minimized.

To find the previous video, I can go into my profiles “video history” playlist, and I'm very graceful for this playlist to exist in the app (was about to make a comment about Spotify here, but they just recently got a history playlist to their Android app, so yey!), but that's more of a workaround than using an app according to my “expected behaviour” point of view.

Will they fix these?

Probably not. There's this excellent answer over at support.google.com by the “Platinum Product Expert” Andrew S where he states:

My understanding is YouTube believes this is a feature for the creators of the videos, and it should only happen if the video's creator has uploaded translated titles. Do you have reason to believe this happens without the creator doing it?

This may be the argument they use for the force CCs as well, but it's stupid. They're basically saying “Nah we added this feature, you better use it!”.

Moral of the story

Let's see if we can find some lessons here: